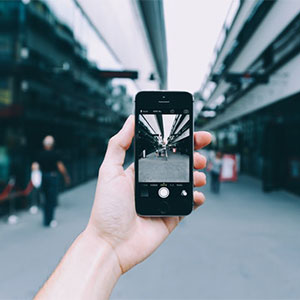 You’re at your child’s soccer game and the ball gets passed to them as they make their way to the goal line. You pull out your smartphone to record the moment. Although the field is wide, you shoot the video vertically. You intend to share the video to your social media accounts but it doesn’t show as clearly when posted to your feed. Where did you go wrong?

Just a few years ago, everyone was recording vertical videos and it was considered the norm. Now, unless viewed on another phone, video footage shot at a vertical angle will not look good. Jus like photos should be adjusted to fit different formats, videos now follow similar rules. Instagram, for example, has different dimensions for stories and in-feed content even though both forms of content are shared on the same platform. For this reason, it is important to record in a format that allows the most flexibility for distributing across multiple platforms.

When in Doubt, Choose Widescreen

Shooting video in widescreen, with your main focus or action in the center of the frame, gives you the option to edit it for vertical later. Technology has improved so much that most smartphones capture images and video at 4k-8k resolutions – making them large enough to crop and make vertical (as long as the subject is in the middle of the frame). The biggest advantage of shooting in such high resolutions is that you never lose resolution quality when cropping or editing for smaller formats.

One of the first things new photographers and videographers learn for capturing great content is the rule of thirds. Simply put, the basic principle of the rule of thirds is to imagine breaking an image down into thirds (both horizontally and vertically) so that you have 9 parts altogether, like a grid. When recording, keep this grid in mind and try to capture your subjects in a way that identifies four important parts of the image as points of interest within a frame.

According to Digital Photography School, “The theory is that if you place points of interest in the intersections or along the lines that your photo becomes more balanced and will enable a viewer of the image to interact with it more naturally.”

The next time you decide to create video content for either of your social media platforms, turn your phone on it’s side. For tips on recording widescreen video and images, contact our office. You’re followers will thank you later.